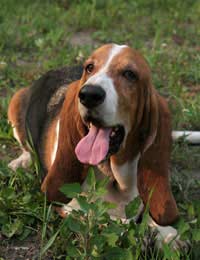 Elbow dysplasia is considered a significant problem in many breeds of dogs by the British Veterinary Association (BVA), to the point where – together with the Kennel Club - it has introduced a screening scheme to determine the animals carrying this hereditary disease and to help avoid breeding from them.

What is Elbow Dysplasia?

Similar to hip dysplasia, elbow dysplasia (ED) is caused by the abnormal development of the elbow joint due to problems in the growth of the cartilage on the surface of the joint or the structures around it. These growth problems lead to secondary osteoarthritis, which is irreversible and will cause lameness and pain. The disease can begin in puppyhood and affect the dog for the rest if its life. Unfortunately, the elbow seems to be especially prone to this type of disease due to its construction similarity to a hinge and its propensity for high motion. It is also the joint which normal forelimb gait is most dependent on and so any small changes in any part of the joint will cause large changes in function.

How to Detect Elbow Dysplasia

Like hip dysplasia, elbow dysplasia is most reliably detected by radiographs (X-rays). This is because the dogs that show lameness are only a small proportion of the whole diseased population – in fact, the problem for many breeders is that many dogs have osteoarthritic changes in their elbows but remain asymptomatic – thus, they never show lameness and can exercise freely but they are still carriers of the ED gene and as such, have sub-clinical disease where they still have a high chance of producing lame offspring, if they are bred from. These subclinical dogs can be identified by X-rays and should never be used in breeding, if ED is to be controlled and unecessary suffering prevented.

Since ED can start in puppyhood, dogs that suffer from clinical ED will often start showing lameness between 6 and 12 months of age. Any persistent front limb lameness in puppies should be thoroughly investigated by a veterinary surgeon. (Remember, there are other diseases and condition which can produce these symptoms). ED usually causes pain on flexing or extention of the elbow and the puppy may show a stilted forelimb gait but X-rays are needed for confirmation. Like hip dysplasia again, treatement depends on the severity of the disease.

Some cases can be managed with controlled exercise and weight management (this should be done in all cases, regardless of severity) whilst others may require drugs to relieve pain and inflammation. Severe cases may require surgery. Treatment should always be discussed with your vet and considered on an individual case basis. The irreversible changes mean that the dog’s ability to exercise will gradually be restricted through life but with correct management, especially in the early stages, the dog can lead a comfortable life.

The main cause of elbow dysplasia is genetic – research has shown that ED is a high heritability disease (ie.a high proportion of the cause of the condition is genetic) and the higher the degree of ED in the parents, the greater the chance of passing the disease to their offspring. However, other factors, such as growth rate, diet and exercise can also play significant roles in influencing the severity of the disease.

Elbow dysplasia is a hereditary disease therefore the only way to combat the disease is to make sure that only animals with “healthy” elbows are chosen for breeding, so that the problem can be reduced within the entire canine population. Certain breeds, which share genetic material, are more vulnerable to this disease – in particular, medium- and large-breed dogs, such as the Basset Hound, English Mastiff, German Shepherd, Golden Retriever, Great Dane, Irish Wolfhound,Labrador Retriever, Newfoundland and Rottweiler.

To help only select animals with the best genetic make-up for breeding, especially with regards to elbows, a new UK ED screening scheme has been set up where animals are radiographed and given a score, based on any signs of ED in their elbows. The grades are either 0 for Normal, 1 for mild ED, 2 for Moderate ED and 3 for Severe ED. Breeders are advised to get all their breeding stock graded and to only breed from animals with scores of 1 or 0. This way, most of the subclinical and clinical dogs will be eliminated from the breeding pool and prevented from passing their defective genes onto the next generation.

It is important that a high proportion of breeders in all affected breeds participate in this screening programme and that screening is carried out over several generations (because ED shows dominant inheritance) to ensure success. Other countries have been successful in significantly reducing the ED problem through similar screening schemes and it is hoped that the UK can follow in their footsteps.