Home > Types of Dog Show > The Show Certificate of Merit 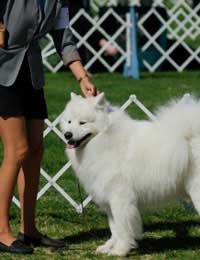 In order to encourage exhibitors to attend an Open dog show the Kennel Club introduced the Show Certificate of Merit.An Open Show is a dog show that is open for entries from any breed of dog that is registered with the Kennel Club. These types of shows can be found all over the country every weekend and are ideal places to start a dog showing career. For breeds that don't have classes specifically for them there are variety classes where they can compete against others in their group.

Some Open shows are judged on the group system. This means that once a dog has won its class and is then declared the best of its breed they compete for one of the four places in its group.

How Do I Win the Award?

You obtain the award after collecting 25 points at group or general open shows in the following way:

When Can I Claim From?

The Show Certificate of Merit was introduced on 1st January 2003 so any points won from that date can be used towards your claim. This award was introduced to encourage people to enter their dogs at Open Shows rather than just attend the larger Championship Shows. The Open Show is usually run over one day and you are always able to find one in the vicinity of the area that you live rather than travel for many miles as is the custom with the majority of Championship shows. Entry fees are lower and class numbers are quite often smaller. There will often be only four to six classes for each breed but then the dog can be entered in other classes, known as stake classes and variety classes,if the owner wishes.