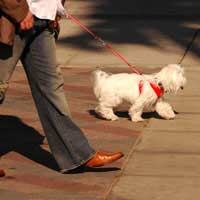 There have been a few high profile cases of dog attacks on humans and aggressive behaviour, which have lead to several laws being put in place to protect animals, their owners and the general public from dangerous dogs.

It is always advisable to check with your local authority as bylaws relating to dog ownership can change form area to area. Many laws are common sense such as picking up after your dog where there is now an on the spot fine. The only place that you needn’t pick up after your dog is on agricultural and forestry land, however even on this type of land any responsible dog owner should pick up – it’s not nice to leave dog waste anywhere. If you get into the habit of always picking up after your dog then it becomes second nature and is not a chore.

Also, keeping a dog on a lead in public places is quickly becoming law. You may think your dog is friendly and ‘only playing’ but other people out walking may not, before you know it you can be accused of having a dangerous dog just because he was being friendly.

Check your council’s website for the latest rulings in your area.

Professional dog walkers are now, in some areas, banned from exercising more than six dogs in public places. This ruling cannot come soon enough for the many people who while out walking their dogs are confronted by out of control dogs running as a pack.

This act was put in place to safeguard the public from dangerous dogs. The numerous laws have caused problems over the years where dogs have been seized for no other reason than looking like a banned breed. Many dogs have died in custody despite their owners and the dog loving public fighting for their release.

There are a few breeds listed as being banned in this country:

Probably the most controversial breed in existence. After the dangerous dog act 1991 these dogs were registered, neutered and then only let out in public on a lead and muzzled. Today, some sixteen years later there are still reports of these dogs attacking people and being used for fighting.

There are several other banned breeds including the Japanese Tosa, Fila Brasiliero and the Dogo Argentino.

Have you got third party insurance in case your dog causes an accident? Many years ago this was included in all household insurance policies; however this is not always the case these days as it is assumed that dog owners automatically hold separate canine insurance.

This law can be used if your dog is found to be without a lead or out of control in a public place.

This controversial bill has recently been passed in parliament. Many sections of the bill are not welcome by true dog owners who have campaigned long and hard for the right to retain tail docking. The public voted on national television recently and the overwhelming vote was to retain the right to dock.

Did you know that if your dog escapes, even if it was not your fault, that a dog warden can pass your dog on to be re-homed after only seven days? If your dog is found you will be charged at least £25 even if it has a microchip, tattoo or is wearing a name tag.

We’ve only scratched the surface of dog law in the UK – it makes you want to keep your dog locked up at home doesn’t it? But then that would be breaking a law too!

So, love your dog, feed and water him and walk him on a lead. Pick up if your dog fouls the highway and never let anyone touch him in case they claim he attacked them – that should keep you safe!

Points of a Dog