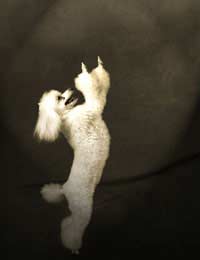 Mention heelwork to music and at once we can see Mary Ray and her amazing dogs take centre stage at Crufts to entertain the crowds before the Best in Show ceremony takes place. The music of Mack and Mabel is enough to bring a tear to the eye of the hardest soul without watching Mary’s devoted dogs perform for their mistress.

After Mary’s performance everyone wanted to dance with their dogs and interest grew throughout the dog world. Gradually interest spread worldwide. Although heelwork to music has become a competitive sport in the USA the principal was different to Mary’s performance which was more freestyle.

Paws-n-Music was formed in 1999 by Kay Laurence and such was its popularity that Kennel Club registration was applied for in 2002. The HTM Freestyle club followed, then the Canine Freestyle GB Club shortly after. All three clubs have active memberships with website forums, display and competitions.

Mary Ray and her associates hold workshops and seminars around the UK. In fact they are often travelling overseas; such is the draw of this new canine hobby. If you are interested in joining this sport it may be advisable to join a local agility or obedience club, as there will be handlers there who have knowledge of classes. Clubs and Societies also travel to or arrange their own workshops for the top heelwork to music performers to teach their skills.

Yes Mary Ray still performs at Crufts and long may she do so, but in smaller rings during the four days leading up to the big Best in Show event, you will find other demonstrations of heelwork to music. Young children perform alongside the young at heart and if the crowds are anything to go by, it is still drawing the interest of the general public that flock to the NEC.

Heelwork to music is drawing in fresh interest to canine sport that was previously lacking. Many people have moved from agility into heelwork to music and the publicity that surrounds this is appealing to the younger generation.

There are now many DVD’s and videos showing the highlights of Mary’s performances along with those teaching the novice how to dance with their dogs.

With instruction books to train the interested and a co-operative dog, what is stop anyone trying heelwork to music in their own homes – perhaps even starting their own club.

With heelwork to music now recognised by the Kennel Club as an official canine sport there are bound to be many clubs forming in future years. No doubt this will start within obedience and agility clubs but how about thinking further afield? Wouldn’t it be marvellous to see a troupe of Rottweilers dancing to the sugar plum fairy or perhaps a Shar Pei performing to The Ugly Duckling? Breed clubs could take the lead and help move this new canine sport further into the field of general competition until we have classes at every Open and Championship show.